Juno explores the link between Ganymede and Jupiter's polar aurora

A study conducted by the Southwest Research Institute (Texas, USA) and in which researchers from the Laboratoire for Planetary and Atmospheric Physics (LPAP) of the University of Liège took part, has provided a better understanding of the links between the moons of Jupiter - and more particularly Ganymede - and the aurorae that occur in the atmosphere of the largest planet in our solar system. These observations confirm a theory put forward by ULiège researchers to explain these aurorae. This study is published in the journal Geophysical Research Letters.

ne of the unique features of Jupiter is that each of its main moons (Io, Europa, Ganymede and Callisto) has a characteristic signature in the planet's aurora. These are called satellite auroral footprints, as they are bright spots that face the moon to which they are attached. In reality, when we look at them closely, these footprints are themselves made up of several spots," explains Bertrand Bonfond, co-author of the study and a F.R.S.-FNRS Research Associate at the LPAP (STAR research unit / Faculty of Science) at ULiège. On 8 November 2020, Juno carried out a close flyby of one of these spots, revealing particularly interesting details about what gives them birth."

With a diameter of 5 300 km (almost twice the size of our Moon), Ganymede is the largest moon of Jupiter. It is also the only moon in the solar system to generate its own internal magnetic field," explains Prof. Jean-Claude Gérard, a collaborator at LPAP and co-author of the study. Discovered in 1610 by Galileo, Ganymede is the third major moon of the Jovian system in order of distance from Jupiter, after volcanic Io and Europa with its presumed ocean of liquid water under its ice crust, but before Callisto, which is studded with impact craters. All these moons are embedded into a disc of ionized gas (also known as plasma), which itself originates from the volcanoes of Io. This plasma is frozen in Jupiter's magnetic field and therefore rotates around Jupiter at the same speed as the planet rotates on itself.

Ganymede and its magnetic shield, therefore, form an obstacle to this flow of plasma around Jupiter. Just as in the case of a rock emerging from a river, this obstacle will generate waves. The magnetic field and plasma disturbances generated by Ganymede are called Alfvén waves. They propagate along the field lines towards Jupiter's poles. As they approach the planet, these waves accelerate electrons, which then collide with Jupiter's atmosphere, creating auroras.

"Juno is a particularly well-equipped mission to study the origin of the various forms of aurora since it can simultaneously measure the magnetic field, electromagnetic waves and charged particles at the same time as it takes detailed images of the polar aurora," explains Vincent Hue, a researcher at the Southwest Research Institute (Texas) and first author of the study.  This is not the first time that Juno (the US spacecraft orbiting Jupiter) has passed through an electron beam connecting one of Jupiter’s moons to Jupiter. During a previous crossing of a spot of Io's footprint, Juno's instruments observed both a strong disturbance in the magnetic field (related to the Alfvén waves) and the electron beam that would trigger the aurora by striking the atmosphere. But this time, when it crossed one of the spots in Ganymede's footprint, no field disturbance was detected, only the electron beam was found. This was no surprise to the researchers. This is exactly what we expect to see if the electrons come from the other end of the magnetic field line," continues Bertrand Bonfond. Indeed, a few years ago, we noted that these Alfvén waves could accelerate electrons in both directions, and that some electrons could cross the entire magnetosphere to finally create auroras at the pole opposite the place where they had been accelerated. According to this theory, it is because of this complex origin that the footprints form several spots instead of one, and these superb observations from Juno confirm our explanation." 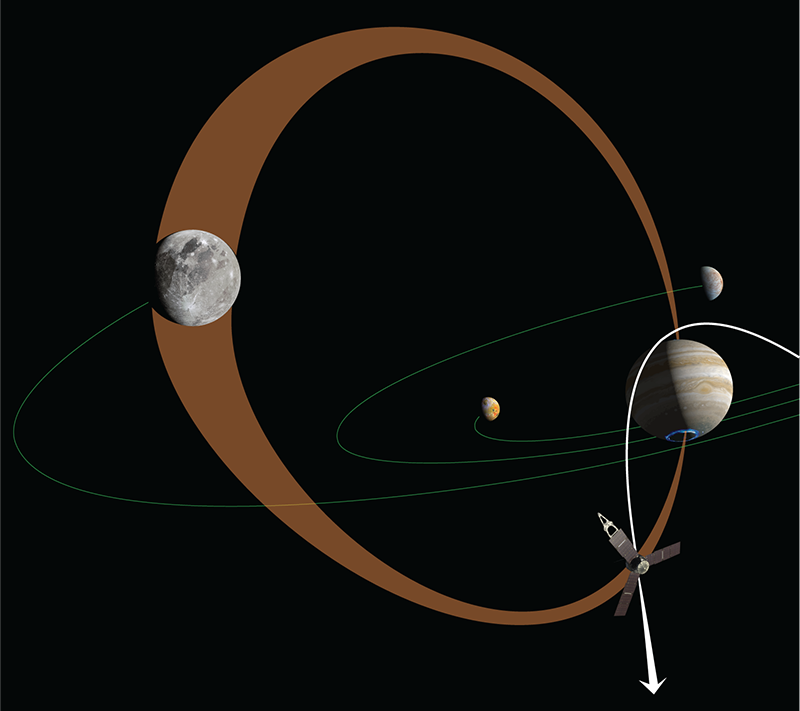 Juno is a NASA mission launched to Jupiter in 2011. Teams from the Liège Space Centre contributed to the design of the UVS (UltraViolet Spectrograph) instrument on board the probe and LPAP researchers are part of the scientific team processing its data. "The analysis of the unique link between Jupiter and its moons will soon continue with the launch of the European Space Agency (ESA) JUICE probe in early 2023. Its mission will include close flybys of its icy moons Europa and Callisto, but above all of Ganymede, around which the probe will eventually orbit," says Professor Denis Grodent, director of the STAR Research Unit and the LPAP. The Centre Spatial de Liège (CSL) and LPAP are involved in the development and exploitation of the results of several instruments onboard.

When flying through the electron beam connecting Ganymede with Jupiter, Juno measured the electron "rain" and observed the auroral light it creates. SwRI led the research that confirms a decade-old theory explaining the morphology of the auroras created by Jupiter's moon on Jupiter itself.